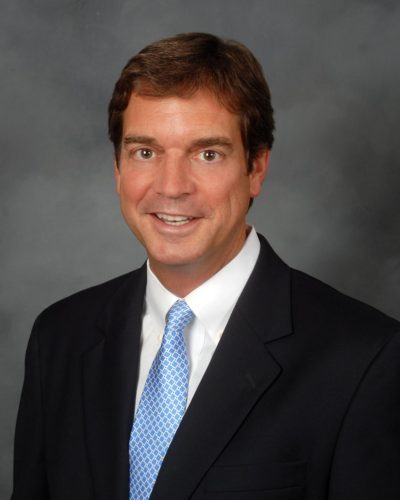 We are excited to officially announce Wayne Gioioso '78 as the 2021 recipient of the Rev. Joseph M. Kelley, SJ, Medal—the highest form of recognition given to a Loyola Blakefield alumnus.

Wayne currently serves as President of Mid-Atlantic Properties, Inc., the company he founded in 1987. He began his career in real estate in 1984 and has been recognized for his expertise, passion, and entrepreneurial spirit. He has earned several awards and honors including Baltimore Business Journal’s “Top 40 Under 40” and was a finalist for Ernst & Young’s “Real Estate Entrepreneur of the Year.”
Wayne’s commitment to Jesuit education, service to others, and the city of Baltimore is most evident through his leadership roles as a founding member of Cristo Rey Jesuit High School and the Loyola Early Learning Center. He has also served on several local boards including Johns Hopkins’ External Affairs, the Maryland State Fairgrounds, the Baltimore County Economic Development Commission, the Towson Urban Partnership, and Loyola University’s Board of Sponsors. He is currently serving as Vice Chair of the Loyola Blakefield Board of Trustees and will begin a two-year term as Chair on July 1, 2021.
“Wayne is relentless in his support of all things Loyola and Ignatian,” said Anthony Day, President. “As a trustee, he takes a genuine interest and concern in all aspects of the student experience and ensures that the Loyola Blakefield journey that he so lovingly cherishes persists and thrives for the benefit of current and future Dons. He also proudly represents Loyola in the community as an alumnus and parent. I’m honored to call him a mentor and friend.”
Above his professional successes are the many ways Wayne has served local nonprofits through leadership, generosity, and volunteer efforts. As testament to his commitment serving the needs of the local community, the entire Mid-Atlantic staff spends one day per month taking part in a day of service. They partner with organizations such as Our Daily Bread, Habitat for Humanity, and Ronald McDonald House Charities, among others.
“Needless to say, I was shocked when I was told I was receiving the Kelley Medal this year,” said Gioioso. “I am honored to accept this award and dedicate it to my fellow Dons from the Class of 1978, to my son Bennett ’20 and his incredible Class of 2020, and to Fr. William Watters, S.J., a lifelong mentor and friend, whom I met as a sophomore at Loyola.”

Wayne currently resides in Woodbrook with his wife, Holly. They are the proud parents of Bennett ’20 and three daughters, Kaylie, Kara, & Lily.

The following testimonials (edited for length) were shared by those who endorsed Wayne’s nomination for the award.
“Wayne's positive influence on the city of Baltimore can also be found through his longstanding commitment to Cristo Rey Jesuit High School. As a founding member of the school, former Chair of the Board of Trustees, and continued role as Trustee, Wayne Gioioso has enabled well over 500 alumni of the school to go to college and become leaders in their communities. Wayne represents what Loyola hopes for the life of every Don. He is the consummate professional, loyal friend, generous citizen, and man of faith.” – Chip Cooke ‘92
“For more than 40 years, I have had the special blessing of knowing Wayne Gioioso and being his spiritual director. He first came to see me when he was in his sophomore year at Loyola. Over the years, he has come to speak about his interior life of prayer and where he has found God in his family, friends, and daily world of work and play. In the mid-1990s, he undertook for a year the Spiritual Exercises of St. Ignatius. We met almost every week to talk about how he was finding and responding to God. In the deepest sense of the phrase, Wayne is a true "Man for Others" in the lgnatian tradition: a man of integrity, generosity, compassion, and grace.” – Rev. William Watters, S.J.
“I have seen firsthand the many ways my dad has impacted people in need. He has given people time, resources, and insights into how to become the best versions of themselves. The thing that impresses me the most about my dad is the way he makes people feel and especially how he makes me feel. A simple conversation with my dad can light up my day, even on my worst days.” – Bennett Gioioso ‘20
“When Wayne sees an opportunity to improve the lives around his hometown of Baltimore, he seizes it and lends his support. His generosity makes an impact right away, and it lasts. In true Ignatian fashion, he gives selflessly and does not count the cost. Wayne is a true ambassador of the Ignatian spirit, living out the gospel every day. I am honored to see him as a candidate for this most worthy award.” – Bill Macsherry ‘88
“I have worked with Wayne for the past 10 years. During that time, he has taught me real estate with purpose and excitement. On many occasions, Wayne has challenged me to reflect on the Ignatian way as I face a business or personal dilemma. Wayne is constantly looking for ways to lend his time and resources to make another’s experience better. He invites the company to join he and his family at Beans and Bread to serve lunch to the homeless. Afterwards, the team eats lunch together and reflects on the experience. This is just one example of his generosity and how he shows thanks to God.” – Ben Dabrowski ‘97
“In all of his roles—devoted husband, loving father, visionary civic and business leader, and generous philanthropist—Wayne has truly lived a life that exemplifies Ignatian values. Seeds planted in the Catholic home created by Wayne’s parents were nurtured at Loyola Blakefield. And in the years since Wayne’s graduation from Blakefield, he has labored in the fields. The harvest has been plentiful, and it has nourished thousands of people. I can think of no one more deserving than Wayne Gioioso to receive the Kelley Medal.” – Mary Beth Lennon, President, Mercy High School, Baltimore
The annual Kelley Medal Award Ceremony will be broadcast from the Our Lady of Montserrat Chapel on Thursday, March 11, at 8:30 a.m. All members of the Loyola Blakefield community are invited to view the program via our YouTube channel.

About the Award
Named in honor of Rev. Joseph M. Kelley, SJ, the Kelley Medal recognizes his dedication and commitment to educating Loyola students in physics and mathematics for nearly 40 years. As such, the Kelley Medal is regarded as the highest form of recognition given to a Loyola alumnus. It recognizes an alumnus who is outstanding by reason of distinction gained in business, profession, or by his outstanding participation in ecclesiastical or civic affairs. In addition, the alumnus is recognized for how his personal, family, and public life serves as a role model and example to the students and graduates of Loyola Blakefield
Back
500 Chestnut Ave. Towson, MD 21204
communications@loyolablakefield.org
(410) 823-0601