6/10/2022
"Right now, the men in the Class of 2022 are more closely bonded to each other than they have ever been. Right now, we are the most brilliant, awe-inspiring objects in this community. But right now, we are mere moments away from graduating and beginning a new journey as part of new communities. I believe that in the years after we leave, this class will be a benchmark, a notch on the measuring post by which the classes after us are judged. I believe that God specially assembled this group of guys for this moment and time in history. A time when war is still raging in the Ukraine. A time when bombs are still being dropped on Yemen. A time when millions of children just like us go to bed as the pangs of hunger gnaw at their empty stomachs. In this moment, I believe we are being called by God to do what the last four years have prepared us to do. To respond. To be generous. To serve him as he deserves. To give and not to count the cost. To fight and not to heed the wounds. To toil and not to seek for rest. To labor and not to seek a reward, except that of knowing that we do His will."
– Toni Akintola '22 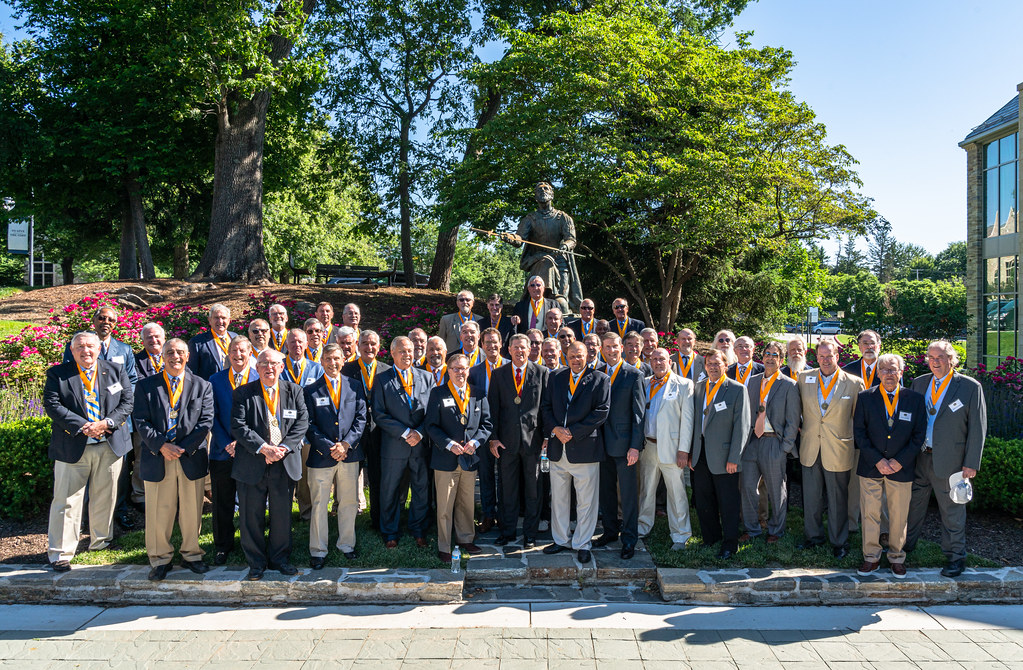 The Class of 2022, made up of 177 Dons, officially walked across the Hollow and graduated as Men for Others on the morning of Sunday, June 5, during our 170th Commencement. This is the 40th consecutive year that graduation was held in the Hollow. We were also excited to welcome back Dons from the Class of 1972 in celebration of their 50th anniversary as they led the procession. During the commencement ceremony, opening remarks were presented by Tony Liberatore, and this year's commencement speech was provided by Toni Akintola. You can watch the entire ceremony below. The Baccalaureate Mass was celebrated by School Chaplain Rev. Bruce Steggert, SJ, on Saturday evening at the Cathedral of Mary Our Queen. You can watch the Baccalaureate Mass here.
COMMENCEMENT AWARDS
The following awards were presented before the conferral of diplomas.

THE REV. FATHER LLOYD D. GEORGE, S.J. AWARD is presented to that member of the graduating class who has achieved the highest grade-point average through the mid-point of his senior year. This award was presented to Matthew Welling.

THE REV. ANTHONY J. ZEITS, S.J. AWARD, presented by the Loyola Mothers’ Club to a Senior who has demonstrated outstanding sportsmanship and leadership on and off the athletic field. This award was presented to Noah Bull.

THE DOCTOR FORD LOKER AWARD is presented by the Loyola Fathers’ Club to a Senior who holds a varsity letter and is outstanding for academic excellence. This award was presented to Colin Verrett.

THE MATTHEW J. RUSSELL AWARD, established by the graduating Class of 1986, is presented to a Senior whose commitment to God, family and friends has been exemplified by a quiet, sensitive, and selfless concern for others. The recipient of this award was Charles Burke.

THE MICHAEL J. IAMPIERI AWARD was established to honor Mr. Michael Iampieri, a beloved member of the Loyola Blakefield faculty from 1966 to 2007. During his tenure, Mr. Iampieri founded the School’s art department and taught art to generations of young men over four decades. The Michael J. Iampieri Award is presented to a graduating senior who has demonstrated personal and spiritual growth through his pursuit of creative self-expression and his achievements in the arts. This award was presented to Erick Graham Castaneda-Galindo.

THE REV. JAMES F. SALMON, S.J., AWARD is presented to that graduate who has demonstrated leadership in student activities and scholarship in Science and Religious Studies. This year’s recipient was Tony Liberatore.

REV. ALOYSIUS P. MCGONIGAL, S.J., was a chaplain whose extraordinary service to his fellow men ended with his death in Vietnam. The Rev. Aloysius P. McGonigal, S.J., Award is presented by the Loyola Fathers’ Club to a Senior who has worked to full capacity in and out of the classroom but has received little recognition for his tenacious spirit. The award was presented to John Keating.

THE DENNIS B. WOOLFORD “CURA PERSONALIS” AWARD is given in loving memory of Dennis B. Woolford class of 2010. Although Dennis was a gifted athlete who started on 8 MIAA championship teams including the undefeated 2008 Football team, Dennis will always be remembered for his kind heart, free spirit and a smile that would light up the room. He considered every Don his best friend and every teammate his brother. This award is given to a student or faculty member of Loyola Blakefield who best represents "care for the individual person." This award was presented to Conor Becks & Parker Becks.
THE JOHN H. WEETENKAMP III AWARD is presented to a graduating senior who has been caring to his peers and demonstrated dedication to the mission of Loyola Blakefield. He is a young man who has embodied the words of Saint Ignatius by his actions and has served his fellow Dons and others generously through the Campus Ministry and Service programs as well as other opportunities. The recipient of this award was Matthew Cooper.

THE KENNETH C. MONTAGUE SERVICE & JUSTICE AWARD was established in honor of Mr. Ken Montague ’60, a dutiful public servant and attorney admired for his ethics and courage. The first Black student to attend Loyola Blakefield, Mr. Montague is a pioneer who inspires current and future Dons to pursue a life dedicated to justice and social leadership. His service in the Peace Corps inspired a lifetime of dedication to a variety of civic, social, and humanitarian causes. The award is presented to a graduating senior whose words and deeds embody the bravery, spirit, and commitment to service demonstrated by Mr. Montague’s life and career. The recipient of this inaugural award was Nsebong Adah.

THE LOYOLA ALUMNI AWARD is presented to the Senior who is most conspicuous for school spirit, leadership and excellence in studies. The recipient of this award was AJ Larkin.

THE DAVID A. KENNEDY AWARD was established by the Alumni Association to honor Mr. David A. Kennedy, teacher and registrar at Loyola from 1937 to 1977. This award is presented annually to that member of the graduating class who, through unselfish contribution of academic skills, personal talents, and social values in service to Loyola Blakefield and to the community at large, best embodies the Ignatian principle of “men for others.” This award was presented to Adarsh Gadepalli.

THE JESUIT SCHOOLS NETWORK AWARD is presented to the ideal graduate of Jesuit education for being Open to Growth, Intellectually Ambitious, Religious, Loving, Committed to Diversity, and Dedicated to Doing Justice. This award was presented to David Adebogun & Caden Heiser-Cerrato.

THE LOYOLA AWARD, founded in honor of the Rev. John F. Dustin, S.J., is awarded to the most representative member of the graduating class for excellence in scholastic achievement and participation in extra-curricular activities. This award was presented Toni Akintola.
Back
500 Chestnut Ave. Towson, MD 21204
communications@loyolablakefield.org
(410) 823-0601